Coming into today’s fixture, Langsning were second with 18 points and Lajong sixth with 11. In the first leg, Langsning beat Lajong 1-0 on 16th June. Today’s win keeps Langsning’s challenge for the OC Blue SPL title alive as they reduced the margin to leaders Mawlai SC, who have a game in hand, to 5 points (26 to 21).

There were changes aplenty for both teams in the lineups, with Langsning’s Surjay Kumar Pariyar back in goal for Frolicson Dkhar and Batiphar Swer and Pura Nongbri in for Roikhihbha Nongtdu and Kitboklang Pale. Lajong, meanwhile, made even more changes, with the biggest being that Henry Nongneng and Aman Ahlawat were missing in defence.

Despite that, it was actually Langsning’s back line that looked all over the place in the first few minutes. There were openings for Amon Lepcha – making his return to the SLFC starting XI – and if he had only converted one then the match could have taken a very different turn.

Lepcha, however, had to come off the pitch under 10 minutes from the start due to injury and Langsning turned the corner and began to look a little more sure of themselves.

A lovely one-two from Lhuid and Shano Tariang led to the opening goal, with Lhuid’s strike taking the slightest of deflections that may have caught Lajong goalkeeper Wanteilang Malngiang off guard.

Langsning had several more chances in the remainder of the first half but their attempts were all wayward and they almost saw their lead evaporate in the 44th minute but Kharbuli’s good run into the box was not followed by a good shot and Lajong ended the first 45 minutes trailing 1-0.

A couple of quick goals followed the start of the second half, with Syndai swerving neatly past two defenders before pulling off a shot that jagged back and to the left of the diving Malngiang to double Langsning’s lead.

However, Lajong clawed a goal back two minutes later after Kharbuli, having made his way up the middle, produced a more accurate attempt that sneaked past Pariyar.

From then on, though, it was mostly Langsning with the attacks. Lhuid’s second goal was a sublime shot that went low and just inside the upright, leaving Malngiang no chance to stop it. A few minutes earlier, Syndai smashed the ball into the crossbar, which came down but did not cross the line and there were further close calls for Lajong, who were somewhat fortunate to suffer only a 3-1 defeat.

The next OC Blue SPL match will take place on Friday between table toppers Mawlai SC and bottom side Mawkhar SC. In the reverse fixture, on 20th July, Mawkhar had held Mawlai to a goalless draw. 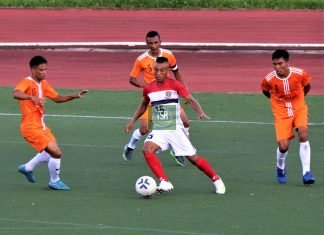 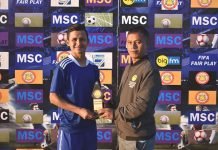 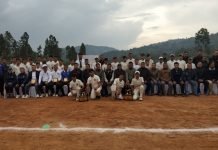 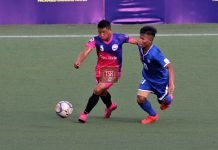 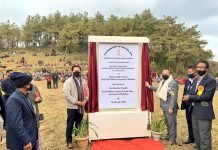