Shillong, Dec 12: It was an intense fight for the SPL 2017 title, but Langsning came through as 1-0 victors over Rangdajied United in the final in Shillong today.

Rangdajied were aiming for a second SPL trophy after having won the championship in 2013, while this was Langsning’s maiden victory. The latter had not featured in an SPL final since 2014.

Rangdajied finished the league stage this year in first place, followed by Langsning.
The teams had met three times this season prior to today, with Langsning winning the first match 2-1 on 9th September before RUFC won the second leg fixture 2-0 on 18th November and then came from two goals to one down to win 4-2 in extra time in the first semifinal on 29th November.

The winning goal today was scored by Donlad Diengdoh in the first half of extra time (94′) after he controlled a chip into the box and powered it high to the left of RUFC goalkeeper Padam Chettri.

Nothing much separated the two sides in normal time, but Langsning goalie Eborlang Nongtdu’s efforts under the bar proved crucial as he denied Rangdajied’s Nnamdi Stephan Harry twice and Sheen Steven Sohktung once in the first half.

After conceding Rangdajied were desperate to get back into the game, as they had done so brilliantly to win from behind in the first semifinal, but it was not to be today, though there was a nervous moment for the men in red when Nongtdu’s clearance hit a team mate and almost trickled over the line.

It was a close run thing, but ultimately it was Langsning, backed by thousands of fans, who were triumphant. 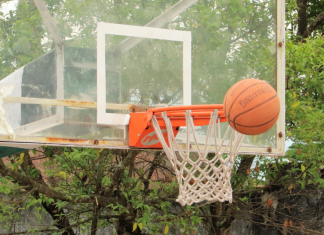 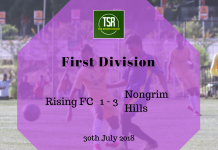 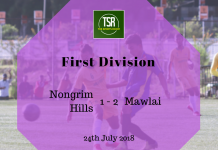 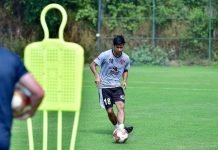 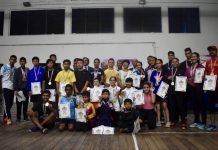