Shillong, Apr 15: Despite the financial difficulties faced by Laban Sports Club, news of which TSR broke earlier this month, the executive committee and supporters have resolved to overcome the obstacles and continue the participation of the club’s football team in the Shillong Sports Association’s First Division.

A function was held yesterday at the Laban Sports Club Indoor Stadium to felicitate its Chief Patron and Advisor Sanbor Shullai, who was re-elected as South Shillong MLA in the recent state elections. The event also acted as a formal inauguration of the badminton and table tennis facilities, which were provided by the office of the East Khasi Hills District Sports Officer George Lyngdoh.

Laban SC President Sammy Myrthong was nearly moved to tears in an emotional speech here he expressed sadness at the possibility of the football team’s disbandment.

However, the mood among the 100-member gathering was a determined one and after a brainstorming session the house unequivocally agreed that the football team must continue.

The opinion of the house came after assurance from the MLA that there are ways and means to move forward and garner resources in the cause of the club.

In his speech, the chief guest lamented that a club more than a century old would have to stop competing in its most accomplished discipline because there was a lack of support from the Laban dorbar shnong (council), but said that he is firmly with Laban SC in its efforts to continue.

The MLA made full use of his opportunity to speak to the gathering, giving a long address in which he attacked the Laban Rangbah Shnong (headman) for supposedly meddling in politics and working against Shullai’s re-election.

“We have tolerated and tolerated too much,” Shullai said of the leaders of the dorbar shnong.

His charged speech also took in the faults, according to Shullai, of his chief opponents at the election, Manas Chaudhuri and Sounder Cajee. Shullai slammed his fists on the delicate lectern while speaking, causing TSR to fear that it would break, and the whole speech felt more like one on the campaign trail. The MLA also mixed in some humour that had his audience in stitches.

Shullai also said that after winning the 27th February election he had received messages from ethno-centric pressure groups and even the outlawed HNLC militant group congratulating him on “defeating the enemy of the Khasi people” and for “killing the second anaconda”.

In a spontaneous response to the needs of Laban SC, local MDC Ricky Shullai proffered a donation of Rs 50,000.

The club also received the wholehearted and unstinting support of the Seng Theilang Kynthei Laban (women’s organisation), who have consistently provided support and encouragement to Laban SC. The team’s football players were also present and two – Batskhem Shanpru and Freddy Diengdoh – spoke briefly but movingly on their desire to see the team continue. The Laban Rangbah Shnong and executive members of the dorbar were invited to the function but were not present. 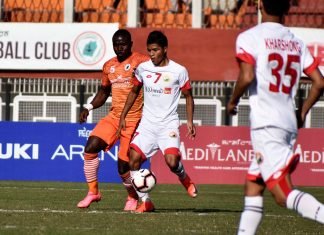 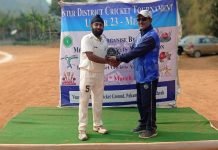 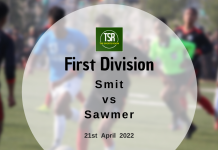 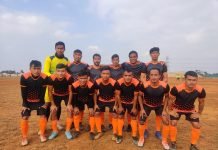