The Third Division final match between Nongrah and Mawtawar yesterday was the first time in two years that I’ve been able to watch a game at the JN Stadium. Earlier this year I had attended the Assam Rifles Invitational Cup final between Lawmali and Assam Rifles held in Laitkor and a few days ago I was in Bhoirymbong where I saw Shillong Lajong playing against a team from West Khasi Hills (although in actuality the team was made up of players plying their trade in the Shillong Premier League).

While I was able to witness Assam Rifles lift the trophy in the former, I was not around to find out the outcome of the latter. I was actually attending another event in Bhoirymbong and could not stay until the end of the game. Both teams were well-matched and the match was finely balanced when I had to take my leave. The game between Nongrah and Mawtawar was of a similar nature. The previous time the two sides met was in the group stage as both were in Group A, a meeting that ended in a draw. Being well-matched, the final was going to be a game of fine margins and it turned out exactly that way.

The jerseys of Nongrah and Mawtawar were both red and white (one more than the other). The shape of the teams, however, was completely different. Nongrah lined up with a 4-4-2 while Mawtawar played with a 4-2-3-1. Wandaplang Wankhar and Solomon Shullai played as the two strikers upfront for Nongrah while Jerrymiah Khongsit started as the lone striker supported by Fedrick Lyngdoh as the withdrawn forward for Mawtawar. I say started because as the match progressed Fedrick began playing as the centre forward with Jerrymiah going into the midfield. From the way the teams lined up it was clear that Nongrah would try to use the width of the pitch while Mawtawar’s focus would be through the middle. The game did pan out the way the shape determined, at least for Nongrah.

Nongrah started the game very well with both the wide players, Aplang Buam and Shanbok Marboh, constantly stretching the play and trying to get behind the defenders. Shanbok was able to cut inside to his right and deliver a couple of crosses early in the game. On the other end, Aplang was able to play his way from a tight spot surrounded by three players. Whenever there was an opportunity, the intention was to cross the ball. From time to time the central strikers would also drift wide and inside to help the midfielders get control of the game. The two central midfielders, Kerionald Pyngrope and Aibanseibor Wankhar, kept the ball well, providing a shield in front of the back four. Nongrah looked a more organised team of the two and the best chance of the half in fact fell to them when they got a free-kick just outside the box. The shot was taken by Kerionald but he hit the crossbar. Before that he had a punt from outside the box as well which blazed over the goal.

As for Mawtawar, although they had an extra player in the middle of the park, they were unable to dominate the game. Because of their shape it meant that they would be trying to thread the ball through the middle. In this, the role of Fedrick was very important. Playing just behind Jerrymiah he would pick up the ball and then would try to bring the wide attackers into the game. While Fedrick looked like a bright spot, contributions from the other players were not forthcoming. Runs from the midfield into the final third were non-existent while the wide attackers, viz Ronaldo Rangslang and Teibhalang Kharpuri, were not able to create any meaningful chances. The only person who seemed capable of creating something was Fedrick, who also began to fade as the game progressed.

Apart from the pressure from Nongrah, this has to do with a tactical switch in which, as the first half began to wind down, Jerrymiah began to drop deeper and Fedrick started playing as the striker upfront. As a result, Fedrick began to have less touches on the ball and his influence waned. The only half chance Mawtawar got was the free-kick from Pynskhem Jana, which was not gathered cleanly by Nongrah’s goalkeeper Baiarkupar Kharpor. The latter, however, made amends by punching the ball away from the ensuing corner. Apart from this half chance, it was Nongrah who seemed more likely to score. Mawtawar was the one who was relieved to go into the break with the deadlock intact.

The second half began in the same manner. Nongrah dominated the game again with their wide players while Mawtawar failed to get Fedrick into the game. It was not long before Nongrah would again get another crack at the goal. It was Kerionald whose free-kick was this time pushed away by the opposition’s goalkeeper Nampynshai Lyngdoh. The ball fell kindly to the path of an advancing Nongrah player who could not keep his shot down. When, finally, the goal came it was down to the mistake made by Mawtawar’s centre back Maxstarfield Mukhim whose lazy clearance ended up in a free-kick. The ensuring delivery was missed by everybody with the ball bouncing kindly for Nongrah’s centre back John Marboh to head it past Nampynshai, making it 1-0 in favour of Nongrah.

While the match was in no way dull, the goal was the spark that brought a bit of desperation. Nongrah got more chances with Aibanseibor fluffing a good opportunity to put the team up by two goals. On the other side, Mawtawar discovered that they could launch balls into the box from throw-ins which were as good as any cross into the box. In fact, it was surprising that this was realised so late in the game. This new tactic appeared more of a chance discovery rather than a deliberate strategy. This was because, in spite of having taller players, Mawtawar were not able to win either the first or second ball, indicating that they had not practised this gameplan enough before. Considering it was a final, the lack of a gameplan was highly surprising and disappointing. Mawtawar, however, did get a golden chance to make a comeback into the game.

As Mawtawar were pushing for an equaliser and pumping balls into the box, there was a deflected header from a player that hit the underside of the crossbar and fell behind the goalkeeper. From where I was sitting it appeared as if the ball had crossed the line. However, that was not what the assistant referee saw no goal was given. This infuriated the players and the supporters. Some of the supporters even tried to get onto the field but were stopped by the officials.

As this was happening, I began to remember the whole Malki vs Rangdajied United match which had descended into chaos and violence in 2018. Luckily, this time around the situation was brought under control. While Nongrah were a better team, they were a tad lucky as well. In the first half there was an incident where Aplang kicked a defender in an after the ball incident. This was a case of violent conduct and I thought for sure that he would get a red card. However, the referee decided to give him only a yellow. This was a big decision since a send-off would have handed the advantage to Mawtawar who could have used their numerical advantage to wrest control of the game. The outcome of the game could have been different then. Nongrah deserved to win but they were lucky to do so.

Notwithstanding the drama unfolding on the pitch, the best part of the match were the fans whose presence in the stadium made the match lively and entertaining. Whether it was encouraging the players or whistling at the referee when decisions went against their team, the fans were absolutely fantastic. And as the final whistle was blown and the players from Nongrah ran to the stands to show their delight, the fans roared with cries of happiness. Mawtawar’s supporters were of course dejected but I am sure they were proud of their team for having reached the final and qualifying for next season’s Second Division. Win or lose, it was fans who won. Without them there is no game of football.

Now that the Third Division is over, I am eagerly looking forward to the Second Division. Hopefully we do not have any more lockdowns and the football season can resume at full swing once more. The last couple of years have been difficult for everybody and we need the game to remind us what being normal feels like again. I hope that we get that feeling back again. 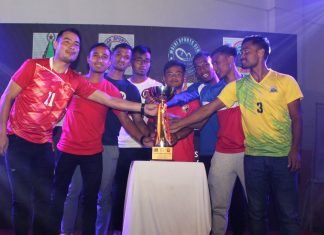 The Sports Room - June 9, 2022
0
Shillong, Jun 9: With less than a week to go before the first highly-anticipated match, the Officer’s Choice Blue Shillong Premier League 2021-22 was... 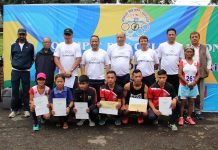 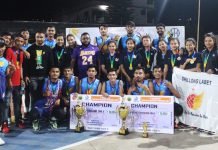 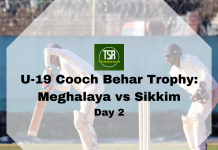