Shillong, Nov 10: The 2nd North East Olympic Games 2022 began in earnest today, with golf, table tennis and basketball joining football as the sports that got underway.

Golf is being played at the picturesque Shillong Golf Course, with 80 players from the North East states playing 18 holes per day over four rounds.

At the NEIGRIHMS Indoor Basketball Court, Mizoram stormed to a 126-35 victory over Tripura in Pool A. The second match then saw Nagaland also win comfortably, 87-39 against Arunachal Pradesh in Pool B.

The first of the women’s matches then followed with Sikkim putting in a strong performance to beat Mizoram 78-50 in Pool B. After three rather one-sided results, Nagaland edged Manipur by just six points, 47 to 41, in Pool A of the women’s event. Hosts Meghalaya then pulled off a 79-54 victory against Sikkim in the men’s Pool B.

There were two U-17 women’s football matches today at the MFA Turf in Polo. The first saw Arunachal Pradesh defeat Mizoram 3-1 in Group 2. Awih Ngiahdim put Mizoram into the lead but Arunachal overturned that deficit with goals by Ciani (32′), Yumlum (68′) and Angel Tayang (81′).

Tomorrow will see three U-21 men’s matches: Arunachal vs Sikkim at 9AM, Meghalaya vs Nagaland at 12:30PM and Manipur vs Mizoram at 4:30PM.

Table tennis, meanwhile, saw the start of their team matches.

In the men’s events, Mizoram were 3-0 victors over Arunachal, while Nagaland took down Sikkim by the same margin. Manipur were 3-0 winners against Arunachal before Meghalaya defeated Nagaland 3-1. 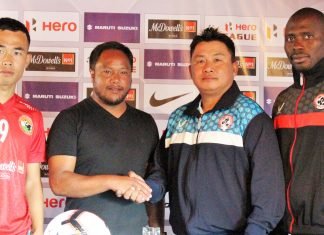 The Sports Room - October 27, 2018
0
Shillong, Oct 27: Shillong will get its I-League season off and running with a North East derby between local club Shillong Lajong FC and Aizawl... 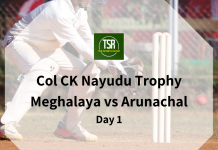