It’s International Women’s Day today and we’ve been speaking to one of the most accomplished female athletes to come from Meghalaya, Matsiewdor War Nongbri…

She’s easily the most recognised female Meghalaya athlete, perhaps of all time. Archer Matsiewdor War Nongbri represented her state and country in the sport and then went on to become an archery judge, administrator and top civil servant.

War Nongbri has taken part as an athlete at the 1986 Asian Games in South Korea, officiated at the 2012 London Olympic Games and 2016 Rio Paralympics and she’s now the Director of Sports & Youth Affairs in the Meghalaya government.

Meghalaya has a rich tradition of archery, but it is very different from the modern form you’d see at the Olympics or World Cup. Technically the two are very different, as in the bows, arrows and targets, but “the basic concept is the same. You hold the bow, pull the arrow back and try to hit the target,” our subject for this feature told TSR.

War Nongbri’s relationship with archery began with the traditional form, which was, and still largely is, the preserve of men. She got into the sport as a teenager, inspired by her late father Woodward Sohliya, a founder member of the Archery Association of Meghalaya (AAM), which began in 1975. When the association was founded its members still used Khasi bows and arrows and only with time did they acquire modern equipment.

Her early exposure to archery proved important in one way at least, as she explained: “When you develop an interest in a sport at a young age it becomes binding. That prodded me to move forward and take the game seriously. In 1981 after my Class 10 exams I had more time to give to archery and used to practise regularly. I still remember that it was on 25th December that I got my first medals – at the sub-junior nationals – a silver in 30m and bronze in 20m recurve. From then I had a pretty good ride. There were ups and downs in competitions, of course, but you feel that the sport is in your blood. It felt very natural to me.”

Back when War Nongbri started there were precious few archers in the country; perhaps only 150. Now there are 20,000 and the growth of the sport has shown in India’s ability to compete at the very highest levels. She pays credit for the newfound popularity to administrators like Vijay Kumar Malhotra and Paresh Mukherjee for making archery truly national.

“The efforts of these individuals led to India improving in leaps and bounds, even if Olympic success still eludes us,” she said.

Our archery star was never able to compete in the Olympics herself, but she certainly had plenty of other successes. She won the Federation Cup in 1985 and took part in the Asian Games the following year. There she used a second-hand bow bought in New Delhi, but on her way back to India she purchased a new one in Hong Kong that she still has to this day. There were no archery medals for India in Seoul, but the experience left a lasting impression on War Nongbri.

“Those were amazing moments, an experience of a lifetime you could say. In the stadium in Seoul there were one lakh spectators cheering you on. I got to meet international archers and officials and it changed my life forever. It built you up as a player, but also as a person. It’s times like these when you realise the importance of the qualities your parents talk about – character, dedication, etc. It builds character to such an extent that you become so confident that you believe you can take on anything,” she explained.

It’s hard to summarise the next stage of her life story, but we’ll give it a go:

War Nongbri stopped competing in archery in 1991, roughly a decade after she began. Through her career in competition she had continued with her studies, supported by her alma mater (Lady Keane College), family and friends. She would finally graduate with a Master’s in Physical Education from Amravati University in Maharashtra in 1990. A year prior to that she was conferred with the U Kiang Nangbah Award for sport by the Meghalaya government. 1990 was also the year she sat her civil service exams, but the results took four years to come out.

After working as a liaison officer in the State Sports Council and as assistant director at the Sports Authority of India, War Nongbri joined the Meghalaya Civil Service in 1994. That was the year that she embarked on the next chapter of her archery career – that of a judge.

“In 1994 I sat for my first judges’ exam (they have to be retaken every two years) and I was the only one to pass. Judging creates a beautiful relationship with sport. It’s not easy but it’s beautiful. It’s taught me what management is all about and what the rules are really all about,” she said.

She’s officiated at World Cups, the 2010 Commonwealth Games in New Delhi and the 2012 Olympics, with the latter being “the highest level of sporting excellence”. She was also on the judges’ commission at the 2016 Rio Paralympics, another marvelous experience.

“It was something totally different. You just develop a sense of utter respect for para-athletes. Some of them are shooting arrows with their mouths, some with their feet. You won’t believe it till you see it. It’s amazing,” she recalled with real enthusiasm.

All of these were tremendous achievements, which she ascribes to the help of the Almighty, who’s held her hand throughout.

Towards the end of our conversation TSR did broach the subject of discrimination in sport. Personally, War Nongbri maintained that she has never experienced gender discrimination in archery and that the Meghalaya government provides a level playing field for all.

“However, I am Vice-President in the Meghalaya State Olympic Association and the only woman at that level. I keep saying that more and more women should be involved in playing and administering sport and we can see it happening bit by bit, so that’s a positive thing,” she stated.

Taking the conversation to the archery scene in Meghalaya, which is somewhat stagnant, War Nongbri, who is also AAM President and Vice-President of the Archery Association of India, admitted that the sport is facing one particular drawback.

“It’s been a long time since Meghalaya produced international archers. The lack of a dedicated ground of our own is a big issue. The government has been helpful in providing us with equipment and coaches. But in Shillong we train in Polo, but have to move from ground to ground as and when they’re free. We have the talents, but without the space it’s just not possible to develop them properly,” she said, adding that there are probably fewer than 100 archers under AAM at the moment.

The National Games, which Meghalaya is supposed to host in 2022, could be the impetus for much-needed development. With a new administration coming in War Nongbri was understandably reticent regarding government plans for the future, though she did say that Shillong’s shared hosting of the South Asian Games in 2016 (when the city was the centre for only a handful of disciplines) has given the state an idea of what it will need to do to put on the much bigger National Games.

She also recalled that the archery venue at the London Olympics – Lord’s Cricket Ground – was ready for the event one year prior to the Games. That’s something she’d love to see Meghalaya accomplish, but, of course, we’re talking about two very different places. Still, it’ll be interesting to see how sport develops in Meghalaya as well as what’s in store for our Director of Sports in the coming years. 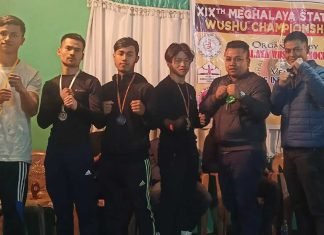 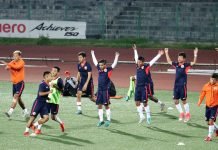 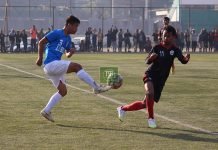 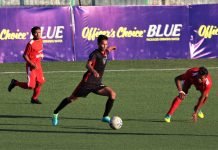