With Shillong Lajong FC losing their Super Cup quarterfinal against Mohun Bagan, Bhogtoram Mawroh takes a look back at their season and tells us of his hopes for the future…

Individual errors made by the players decided the quarterfinal match between Shillong Lajong and Mohan Bagan.

The culprits were Kynsailang Khongsit, Phurba Tempa Lachenpa, Laurence Doe and Shilton Paul. Kynsai, in particular, had a bad outing and never looked like recovering from the mistake he made in the first half. He looked shaky throughout the match. Apart from lacking the experience of playing at this level, Kynsai came second best in the physical duels as well.

The first goal that was scored by SK Faiz was a perfect example of that. This, though, was not very surprising considering how young he is. One thing that was evident to anybody who watched India’s performance at the U-17 World Cup was the difference in physicality between the Indian team and the rest. Kynsai is very good going forward but while defending he needs to get stronger.

The last two matches may have been a bit disappointing for him, but for Kynsai’s growth as a player they are invaluable. What he learns from his performances will determine the type of season he will have next year.

Would Nidhin Lal have saved the second goal? Based on a similar save he made last match, one can argue that he would have prevented the goal. But it would be too harsh on Lachenpa, who, before the mistake against Churchill Brothers in the I-League, had been doing well between the sticks. For me, though, on current form Nidhin is a better goalkeeper and not playing him was a big mistake.

Lajong had a very good opportunity to reach the final where anything could have happened. If everything went their way on that day, they could have won a trophy. That would have immeasurably increased the confidence of the players and the standing of the team within the Indian football fraternity.

In his post-match interview the coach explained that Nidhin had some medical issues before the match. Curiously, though, he was fit enough to be on the bench. I for one don’t understand this situation and I am very disappointed with the decision-making of the coaching staff. They have cost the team a trophy.

The goal by Abdoulaye Koffi was due to the brilliant vision of Redeem Tlang, who found Samuel Lalmuanpuia inside the box with a pin-point lop, and Samuela in turn did very well to sky the ball allowing Koffi to attack it and score the goal. The goal, though, could have been prevented if Shilton had been braver.

Before creating the chance that led to the goal it was Redeem’s brilliant footwork that won the penalty as well. He had glided across the pitch from the left and made a quick pass to Sheen Sohktung, who was then brought down by the defender. Samuela not converting the penalty was a disappointment but he was bound to miss sometime. Everyone misses a penalty once in a while and Samuela has converted more than he has missed. So I don’t think one can be too harsh on him.

Redeem, on the other hand, had another great game. In this match he again displayed the immense talent he possesses. He created chances not only in the first half but in the second half as well, e.g., the one that fell to Sheen.

Apart from leading the attack Redeem did extremely well to track back and win the ball. He fought very hard for every ball and displayed a good team ethic as well. The only let down was when he lost possession on a few occasions.

For me, among the attacking players in the team, Redeem is the most talented. He has good dribbling skills and can beat players in one-to-one situations with speed and skill. Even in tight spaces he is quite comfortable and can create chances for his team mates from every part of the pitch. There are obviously some areas where he can improve on. Though he has played in the wings for most matches, I haven’t seen him cross the ball into the box enough. His finishing also has been a disappointment (only two goals this season) with his lack of decisiveness in front of the goal being exposed time and again (even in the Super Cup).

He came into the team for his goal-scoring exploits and I believe he has a lot more goals in him than his current returns show. If he can work on some of these aspects and bring in more consistency, he can be a wonderful player for club and country.

For the fourth goal (Mohan Bagan’s third) Laurence did well to get in front of the attacker. But the pace of delivery was what led to him making the mistake and getting the unfortunate distinction of scoring an own goal.

Looking back at the season, though, he (along with Daniel Odafin) has been the one of the best players for the team. If he remains next season, Doe’s strength and leadership at the back will be very critical for the development of players like Kenstar Kharshong and Aiban Dohling. Both of them got their chances because of injuries to other players. Their performance, however, showed that they deserved their chance.

Among the two, because of his playing position, I had doubts about Kenstar, but he proved me wrong and I am so happy for it. He has been the most impressive young player for Lajong this season. The manner in which he established himself in the team in his very first season has been very impressive. With experience and proper guidance he can become the leader of the team in the future. I have high hopes on him for next season.

In terms of tactics, Lajong and Mohan Bagan had very contrasting tactics. While Lajong played very narrow and through the middle, Mohan Bagan used the width of the pitch effectively. While both systems have their merits, Bagan had a better defensive line than Lajong.

Whenever Bagan attacked the back line also moved forward, squeezing the space. On the other hand, Lajong played very deep, which left a big gap between the defence and attack. This allowed Yuta Kinowaki and Cameron Watson a lot of space in the midfield where they could easily pick up the loose ball and control the game. If the back line had moved up when Lajong attacked or the front three had dropped deeper when they were defending, they could have prevented Bagan from controlling the midfield. But neither of the two happened during any period of the match.

The rationale for this tactic could be that the coaching staff thought there was a lack of pace in the central defence and feared counterattacks. However, with Lajong unable to muster counterattacks themselves, the tactic backfired. Once they allowed Bagan to dictate the pace of the game, it became all the more difficult for Lajong to come back into the match.

With this match Lajong’s season is officially over. During the course of this season, there have been disappointments as well as some great performances. Looking back I feel the season has given a glimpse of the future and raised certain questions as well.

Allen Lyngdoh Nongbri should get more game time next season. Rakesh Pradhan will obviously be the first choice left back. But unless Lajong offer him a lucrative contract Pradhan will eventually leave the club. When that happens Allen has to be ready to take over. Shaiborlang Kharpan has been performing well on his loan spell with Kerala Blasters in both the Second Division League as well as the Kerala Premier League. His return will greatly bolster Lajong’s attack. With Hardycliff Nongbri set to return to the midfield next season, his partnership with Redeem is something I am looking forward to the most.

That, however, may not happen if an offer arrives for Redeem. I have mixed feelings about this situation. While I would like to see him play for Lajong for at least one more year, Redeem has to pick the right time to leave as well.

When Rangdajied United played against Lajong in the I-League derby in 2013-14 I remember telling my friend, whose father was the manager of Rangdajied, that the only way Eugeneson Lyngdoh could play for India is if he leaves Shillong. I was very happy when the following season Bengaluru FC signed Eugene and the rest, as they say, is history.

Redeem is constantly improving, especially since he moved to the midfield (same as Eugene) and I am sure next year will be his most impressive yet. At the same time, I don’t want him to linger around for too long when he could be playing in a better setup (under marquee coaches and with world-class players). Whatever he decides I hope he will give his best.

Notwithstanding all the confusion regarding the coaching situation, it has become very clear that Alison Kharsyntiew is the head coach. Like for the players, this year was an important learning period for him as well. Having guided a highly inexperienced team to a credible sixth-placed finish in the I-League, I think it has been a good first season for him. I would like to see Alison continue with the team next year as well and show us the lessons he has learned from this season. He deserves at least another season for the hard work he has put.

As a fan I have had issues with Alison’s decision-making and tactics throughout the season (this match as well) and that is not going to change in future. However, if he can win a trophy next season I will be the happiest. So, in the end I would like to congratulate Alison and the team for a good season and hope to see them do better next time.

Thanks to Lajong for all the good memories of this season. Cheers! 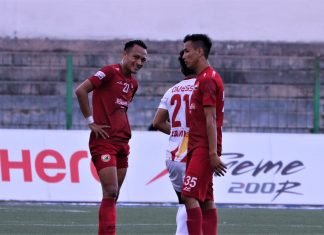 The Sports Room - November 27, 2018
0
We're less than one-third of the way through the I-League 2018-19 season, but super fan Bhogtoram Mawroh is already worried about Shillong Lajong's prospects... It... 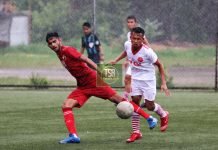 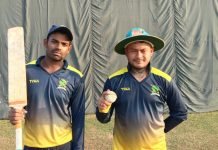 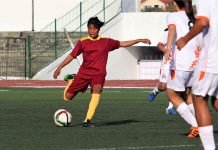