Shillong, Oct 3: A brace from Gamelial Kharlyngdoh saw Sawmer come from a goal down in the first half to record a 2-2 draw against three-time champions Shillong Lajong in the Shillong Premier League at the SSA Stadium here today.

The result is certainly a change from the two sides’ first leg encounter, which Lajong won 5-1 on 4th August.

SLFC chopped and changed their starting lineup a fair bit, giving starts to Dameki Khongstia, Seineo Kuki and Bonison Nongmaithem, but it all went against them in the second half.

Sawmer were aggressive in the first half, perhaps a little too so, as they committed a slew of fouls. One such infraction gave Lajong the opening chance, when Novin Gurung headed in a free-kick taken by Samuel Lalmuanpuia in the 14th minute.

It was all a lot more exciting in the second 45 minutes with SLFC the less disciplined side – they copped four yellow cards in the second half.

In the 57th minute substitute Kynsailang Khongsit struck the woodwork off a corner kick, but from then on it was largely one-way traffic as Sawmer threw themselves forward in search of a goal.

Their search came to fruition in the 67th minute when Kharlyngdoh slammed a free-kick into the back of the net, beating Lajong goalkeeper Phurba Tempa Lachenpa.

It must have helped Sawmer’s morale that their fans were seated behind the Lajong goal and it was the constant cheers of the spectators that fired them up even more.

Four minutes after the equaliser a foul in the box saw Sawmer earn a penalty, which Kharlyngdoh converted for his fifth goal of the season, all of which have come in the last five games. He is now the second highest scorer of 2018, behind only Lajong’s Phrangki Buam (six goals), who did not play today.

Sawmer’s slim lead didn’t last long, however, as Sheen Sohktung made a good initial move up the left flank for Lajong in the 74th minute and crossed the ball in. The first SLFC attempt was blocked by Sawmer custodian Sunshine Kharmuti, but Parvaj Bhuiya scored off the rebound.

Kharmuti, Sawmer’s first choice goalie this season, took a bit of a blow in all the excitement that led to Lajong’s equaliser and five minutes later he had to come off after making a last good block to deny Lalmuanpuia.

U-18 Mebankyrshan Ryntathiang thus stepped into the role of keeper and did a stand-up job in the remaining minutes to deny Lajong.

The draw lifts Sawmer, temporarily at least, off the bottom rung of the SPL points table. Although they are tied on seven points with Malki, Sawmer are in front with a better goal difference (-8 compared to -9). The two teams had drawn their first leg encounter and have yet to meet in the second. Sawmer, however, have played an extra match (10 to nine). Lajong stay in second with 20 points from 10 outings.

Tomorrow Malki will get their chance to rise up in the table when they take on Meghalaya Police at 4PM.

(TSR photo. Shillong Lajong are in red, Sawmer in white) 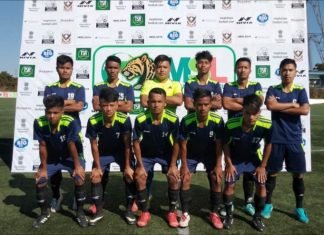 The Sports Room - December 7, 2019
0
Shillong, Dec 7: Lumniwar ensured that the battle for top spot in Group A of the Meghalaya State League will go down to the... 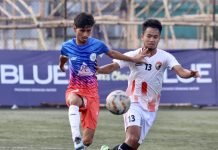 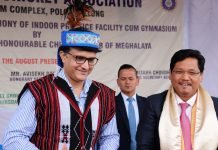 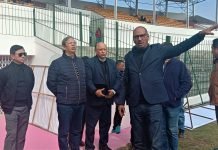 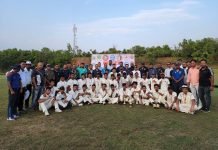