This was Lajong’s 175th I-League match and it turned out to be their 51st victory.

Defeat means that Aizawl will continue to wait for victory in Shillong – they have lost three of their four meetings at Lajong.

Four players made their I-League debuts for Lajong today – Naorem, Phrangki Buam, Lalawmpuia Hnamte and goalkeeper Neithovilie Chalieu. All but two of their first XI were U-22. Aizawl, meanwhile, went with three U-22 players in their starting lineup along with four foreigners – Leonce Dodoz, Kareem Omolaja Nurain, captain Alfred Jaryan and Kromah.

It was almost disaster for Lajong in the fifth minute when Lalrohlua put in a back pass that was awry and it fell to the dangerous Kromah. However, the Liberian’s shot was blocked by Chalieu and the resulting corner was headed wide.

Giving the ball away in dangerous positions was a recurring problem for SLFC, but it plagued the visitors too.

In the 13th minute Naorem was dangerous on the right flank and Nurain, who was losing his footing while chasing the forward, dragged him down for a foul. Lajong captain Samuel Lalmuanpuia took the free-kick and it looked promising for the Reds but for a hurried clearance by the Aizawl defenders.

A few minutes later Aibankupar Dohling committed a foul on Kromah five yards away from the penalty arc, but Nurain did not trouble the keeper with a wide attempt.

Aizawl found it hard going against the young Lajong lads, with the hosts defending in depth, with five players in the back line. Despite having so many men back, Lajong were good at getting the ball up the field accompanied by a number of players to attack Aizawl.

One such move led to a goal in the 20th minute when right back Novin Gurung went up the pitch and passed to Naorem on the right and he curled in the ball beautifully past Aizawl goalie Gurpreet Singh and into the net at the far post.

Naorem had a further attempt in the 27th minute but this time it went straight to Gurpreet, though there was an awkward bounce on the way to the custodian.

In the second half Aizawl started with an early chance, but Alfred Jaryan tamely volleyed a cross to Chalieu in the 50th minute.

Lajong would then go on to strengthen their hold on the game in the 51st minute when Rakesh Pradhan crossed the ball in from the left flank. Naorem had broken away from his marker and got a high boot on the ball, which just about found its way into the back of the net.

Being two goals down Aizawl threw themselves forward and had a couple of look-ins, namely in the 53rd minute when Lalrinfela was narrowly off the mark and then again just before the hour mark when Paul Ramfangzauva produced a terrific low shot from distance that was gathered up Chalieu with a dive to his left. Ramfangzauva would challenge Chalieu again in the 71st minute with another power strike, but the Lajong keeper was up to the task again.

The hosts then almost made it 3-0 in the 67th minute when a defensive mistake allowed Buam to take a shot, but this was put out by a brilliant save by Gurpreet to his right.

The Mizoram team would then go on to pull a goal back when Kromah was fouled in the box. He went on to take the penalty kick himself, converting in the 70th minute.

Kromah would blast another shot five minutes later just wide of the Lajong post as Aizawl fought to restore parity and earn at least a point from this encounter. However, despite the chants and flag-waving of their considerable number of supporters at the ground, Lajong held on for the win. 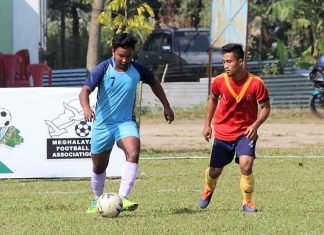 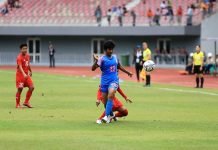 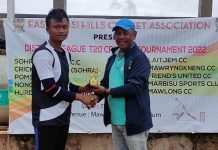 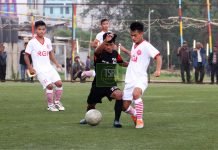