Shillong, Nov 13: Eight wickets by Nirdesh Baisoya sealed a 38-run victory for Meghalaya over Nagaland in the U-16 Vijay Merchant Trophy in Golaghat, Assam, today.

Meanwhile, in the Ranji Trophy, Meghalaya are on 161/6, trailing by 228 runs against Puducherry on the second day.

In Golaghat, where batsmen from both sides struggled, the second day began with Meghalaya leading by 92 runs with their second innings poised on 42/5.

However, Nagaland had the better of the early part of the day, with Baisoya dismissed for a duck. Another three wickets fell with no runs added to the total before tail-enders Waldo Sangma and Gavineal Marpna added one each before Meghalaya were dismissed for just 44. Ranjen was the pick of the bowlers for Nagaland with seven wickets in the innings and 11 in the match.

Nagaland were thus chasing 95 for victory. Both teams went into this match with three wins each in the North East Zone, but Baisoya ensured that Meghalaya topped the table at the end of the game with figures of 8/23 as Nagaland were bowled out for 56. Captain Sudhir Sahani (1/10) and Prince Maurya (1/19) also picked up a wicket each.

Meanwhile, Puducherry added another 120 runs to their overnight score of 269/7 before they were dismissed for 389 by Meghalaya on day two of the Ranji Trophy plate group match in Puducherry.

Not out on 61 at stumps yesterday, captain D Rohit was finally removed by Gurinder Singh, but not before he struck a century (138).

Meghalaya took an early wicket on the second day to reduce the hosts to 280/8, but Rohit and tail-ender Vengat (26) added 101 runs for the ninth wicket. Raj Biswa claimed Vengat’s wicket and Rohit fell soon after to Gurinder.

Staring at Puducherry’s imposing first innings score, the visitors began well enough, with Biswa and captain Jason Lamare putting on 48 for the opening wicket. However, Meghalaya then experienced a mini collapse with Biswa out for 31, followed by his replacement Sylvester Mylliempdah for a duck and Lamare for 16 to leave Meghalaya on 48/3.

Punit Bisht (57) and Yogesh Nagar (45 not out) then came together to add another 97 runs for the fourth wicket, which steadied the ship, but Bisht could not push on for a really big score and fell lbw to Pankaj Singh, who ended the day with the best figures for his side – 3/20. Two more wickets fell in quick succession to leave Meghalaya in a spot of bother at 147/6 at stumps.

Finally, Meghalaya will play their second four-day match of the U-23 Col CK Nayudu Trophy against Nagaland at the Meghalaya Cricket Association Ground in Polo, Shillong, from tomorrow. The match will begin at 8:30AM.

Meghalaya had lost their opening game by 34 runs against Mizoram in Jorhat, Assam, recently. 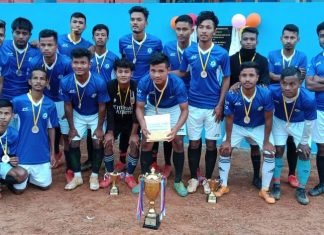 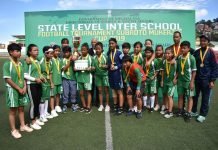 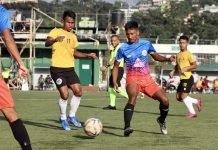 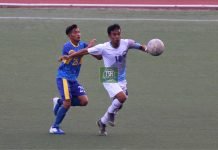