Shillong, Nov 15: A hat-trick by Willis Plaza saw Churchill Brothers register their first victory of the I-League season, with a 4-2 result in Goa today against a poor Shillong Lajong.

Scoring goals hasn’t really been a problem for Lajong, but defence clearly has and it showed as clear as day against the Goans.

This is only the second time in nine I-League seasons that SLFC have lost four games in a row. This year they have scored six goals, including at least one in four out of their five games, but have conceded 12 – the most of any side this year, though Lajong have also played more games than any other team.

Coach Alison Kharsyntiew made several changes to his starting lineup for this fixture. He swapped out goalkeeper Neithovilie Chalieu in place of Phurba Tempa Lachenpa, while Novin Gurung had to be left out after he picked up a red card in the last game against Gokulam Kerala, while fellow defender Kenstar Kharshong was benched. In their places came Mebankhraw Wahlang (his first I-League start) and Kynsailang Khongsit (first start of the season). Meanwhile, Samuel Lalmuanpuia returned to the starting XI, taking the place of Naorem Mahesh Singh.

Lajong began pretty well, with Lalmuanpuia hitting the crossbar in the fifth minute before Phrangki Buam, half stumbling, took a shot that just went wide in the 10th.

Churchill ran rings around the SLFC defenders, though, with the hosts attempting more than 20 shots throughout the course of the match.

In the 18th minute Plaza scored with a header off a Dawda Ceesay cross when he was completely unmarked. Then, however, Lajong showed their scoring capability when captain Lalmuanpuia found the back of the net with a shot from around the edge of the box on the half hour.

Less than 10 minutes later, however, Plaza turned provider for Ceesay, with the Gambian taking a shot of his own from the edge of the Lajong box to restore Churchill’s lead.

2-1 it was going into the second half and the goals kept on coming.

Lajong again restored parity, this time in the 48th minute, when Kynshi combined well with Sheen Sohktung and Khongsit to whip the ball into the net. This was his second goal in the I-League after scoring his first last season. This was also the first time that Lajong have scored more than once against Churchill in Goa.

That feeling of being all square didn’t last long at all, however, with Plaza scoring two quick goals to put Churchill 4-2 up by the 54th minute.

The first (in the 51st minute) saw Plaza head home an Israil Gurung free-kick, which Khongsit had conceded, with Lachenpa coming off his line to punch the ball but not getting his gloves to it.

The Trinidadian then completed his hat-trick by making a solo run, with neither Aiban Dohling nor Wahlang choosing to make a tackle, which allowed Plaza to score past Lachenpa.

After a disastrous spell of three away defeats, Lajong will now return home to take on defending champions Minerva Punjab on 23rd November. 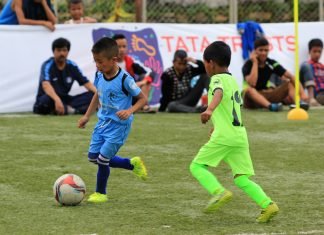 The Sports Room - July 8, 2018
0
Shillong, Jul 8: Some very close contests were witnessed yesterday in the fourth full match day of the Meghalaya Baby League (MBL) 2018 as... 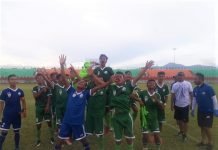 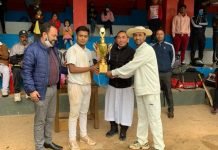 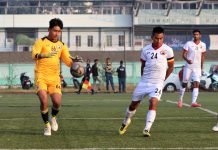