Shillong, Sep 11: Nongrim Hills and Langsning played out a 1-1 draw in the Shillong Premier League at the JN Stadium here today.

Banteilang Shylla put Langsning into the lead in the 13th minute but Bankit Nongrum equalised for Nongrim in the 73rd.

In the 13th minute Syndai timed his run well to beat the defence, drawing Nongrim players towards him. He then tapped the ball to his left for an unmarked Shylla to score from inside the box.

Nongrim captain Nickelson Bina tested Langsning goalkeeper Frolicson Dkhar a couple of times in the first half, while Justerwell Tham was close as well on a few occasions.

The best chances, though, were with the defending champions, with Pale denied by Jesly Sungoh in the 29th minute after breaking through the Nongrim defensive line.

A minute into the second half Sungoh got into a bit of a pickle when a ball was passed back to him. His clearance didn’t go far, but Syndai’s shot was wide. Sungoh did better in the 59th minute when he came off the line to block Pale again.

Nongrim then earned a corner in the 73rd minute. The ball came in and should have been cleared by Langsning’s defence. Instead it bobbled around for a bit before Nongrum shot the ball over the line. That was the first corner Nongrim had in the second half and they converted from it, while Langsning had a total of nine corners (all in the second half), none of which posed much danger for Nongrim.

The sharing of points doesn’t change the situation in the points table. Langsning, on five, are still in fifth place, while Nongrim are last with two points.

Next week, on 18th September, Nangkiew Irat are scheduled to face Ryntih at 3:30PM.

(TSR photo. Nongrim Hills are in yellow, Langsning in red) 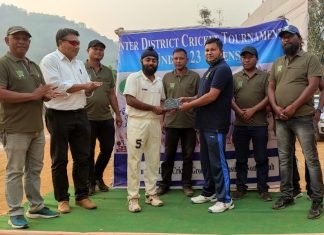 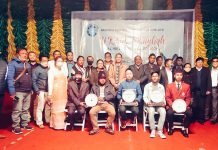 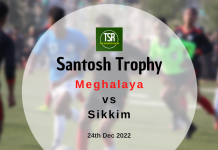 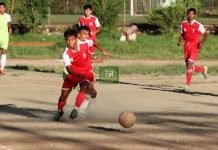