Shillong, Mar 19: Shillong Cricket Association (A) qualified for the Zone 1 final of the U-23 Boys Inter District Cricket Tournament by defeating SCA (B) by seven wickets in the last Group A fixture in Nongkhrah, Ri-Bhoi, today.

SCA (A) will thus meet Ri-Bhoi in the zonal final on Monday for a place in the grand final against Tura District CA.

SCA (A) won the toss and chose to field first, restricting their opponents to 148 all out in 34.5 overs. All four of SCA (B)’s top batters made at least 20 runs but they were all dismissed before they could truly settle in for a big score. Sachin Kumar was the top scorer with 28 runs. Man-of-the-match Jaskirat Sachdeva (3/21) (pictured) was the most destructive bowler, along with Navin Kumar (3/30).

In the other match, in Mendipathar, hosts North Garo Hills defeated East Garo Hills by 35 runs. The Zone 2 match was a dead rubber as Tura had already qualified for the final yesterday.

Playing for second place, NGH won the toss and batted first but were dismissed for 131, with Dairo Marak (29) the top scorer, while Chelchak D Marak scalped 4/18 for EGH.

Man-of-the-match Aditya Singh (pictured below) then bowled an amazing spell to devastate EGH. He claimed 7/7 in 10 overs, which included seven maidens. Incredibly, of 60 legal deliveries he bowled, only two were scored off. EGH were ultimately skittled for 96. 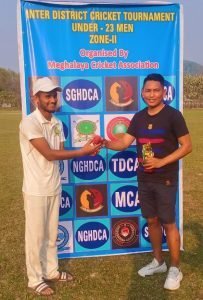 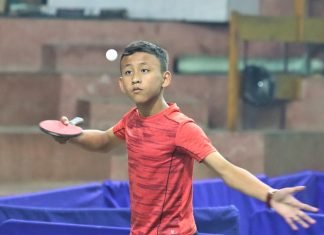 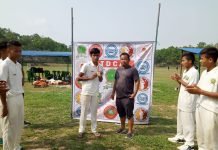 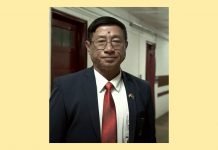 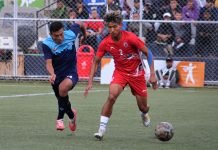 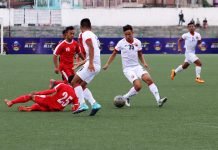