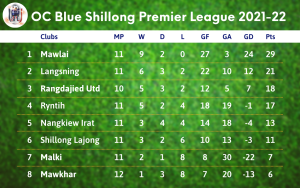 Coming into today’s fixture, table toppers Mawlai had 26 points to bottom side Mawkhar’s 6. In the reverse fixture, on 20th July, Mawkhar had held Mawlai to a goalless draw. Mawlai now have 29 points, 8 more than second-placed Langsning FC (21).

Although Mawlai could not break Mawkhar’s resistance over 90 minutes in the first leg, they did not have to wait too long today.

A Nikelson Bina cross from the right saw Mawkhar’s defence a little too open and Wanshnong rose unmarked to head it into the net for his first goal of the OC Blue SPL season.

Though they looked likely to score even more in the first half, Mawlai were unable to find the back of the net again until the 50th minute when a diagonal ball picked out Kharmalki on the right. He fired from inside the box and though Mawkhar goalkeeper Banshanskhem Kharsyntiew got a glove to the ball he could not keep it out.

Kharmalki got his brace deep in stoppage time when Bina took a short free-kick to Donlad Diengdoh, who laid the ball on for the No. 9 to shoot and make it 3-0.

Mawlai were missing their captain Brolington Warlarpih, who received a red card in the previous game, but the defence line held firm even without the centre back.

Mawkhar had two great chances, one in either half. Garnoldstar Marbaniang nailed a high ball sweetly in the 14th minute but Mawlai goalie Neithovilie Chalieu saved it with a terrific dive to his left. Late in the second half, substitute Justerwell Tham was denied by the upright and then missed the rebound.

Mawlai, on the other hand, had more opportunities than they could count in a performance that was far superior to their last two outings where they looked a little off colour.

Today they were switched on from the start but the only thing Mawlai will regret is not converting more of their chances.

The best of these was the 44th minute Pynbha Suting strike that slammed into the crossbar and came down but still in play. Diengdoh went for the rebound but headed it over.

The Mawkhar keeper was constantly called into play and denied Wanshnong, Fullmoon Mukhim, Robert Khongriah, Kharmalki on separate occasions but could not keep out the three goals and, at the other end, Mawkhar had no success, which consigned them to their eighth defeat of the season.

Tomorrow, Rangdajied United FC (18 points) will take on Malki SC (7 points). Malki had frustrated Rangdajied in a 0-0 draw in the reverse fixture on 2nd July. 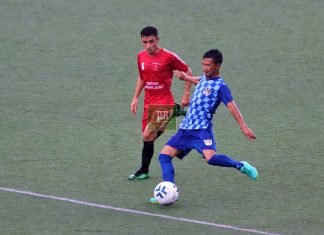 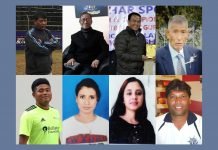 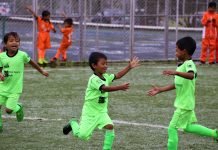 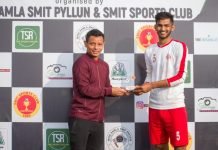