Shillong, Aug 9: Goalkeeper Kenio Lyngkhoi had a day under the bar that he can be proud of as he saved countless chances to allow his Meghalaya Police team to snatch a 1-0 victory over three-time champions Shillong Lajong in the Shillong Premier League at the JN Stadium here today.

The lone goal was struck by Kevin Kharbuli in the 49th minute for MLP in a match that featured torrential rain and near darkness towards the end of the match. The result was a break from tradition as the two teams had drawn both of their meetings last season.

Lajong didn’t seem the same side from when they dismantled Sawmer 5-1 last week. If anything they were a little too lax, not really putting the cops under pressure until the Reds went behind.

There were a couple of promising crosses by Lajong’s Samuel Kynshi and Mahesh Naorem in the first 20 minutes but no one was in place to make anything out of them.

There were also a couple of weak attempts by MLP in the first half but they were pretty much on a defensive footing, that is until an SLFC defender messed up with a pass to a team mate, allowing the police to break forward.

The first attempt by Niwan-o Gatphoh was smothered, but Lalawmpuia Hnamte’s clearance only went as far away as Kharbuli, who made no mistake with his strike.

Possession was pretty much a one-way street after that with Lajong throwing everything at their opponents.

If MLP had to thank Kharbuli for the goal, much praise also has to go to Lyngkhoi, who pulled off three fantastic saves in the last 30 minutes of the game to allow his side to hold on for victory and their first points of the season.

On Saturday Langsning will face Malki at 4PM. 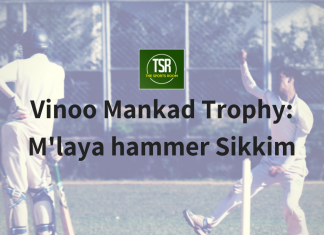 The Sports Room - October 20, 2018
0
Shillong, Oct 20: The U-19 Meghalaya men's team hammered Sikkim by 198 runs in their Vinoo Mankad Trophy one-day match in Bhubaneshwar today. After being... 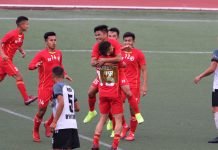 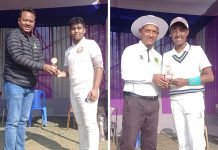 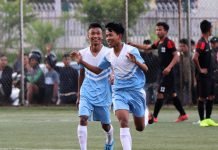 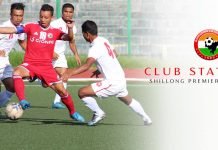