Shillong, Dec 16: A century by Rohit Shah (pictured) took Meghalaya to 215/4 on the first day of their U-23 Col CK Nayudu Trophy plate group match against Sikkim in Anantapur, Andhra Pradesh, today.

Meghalaya were also involved against Sikkim in the Senior Women’s One Day League and that match ended in a sensational, if rather unlucky, tie for Meghalaya. Finally, the Meghalaya U-16 boys’ team are chasing a mammoth first innings score of Maharashtra’s in the Vijay Merchant Trophy pre-quarterfinal.

In Anantapur, Shah, a resident of Nongpoh, came in at number three and finished the day on 132 not out, having struck nine fours on the opening day. Sikkim had won the toss and put Meghalaya in to bat first. A couple of Shah’s team mates managed to get into the 20s but could not push on.

Having won the toss and chosen to bat, Sikkim made 203 all out in their 50 overs, with Vandana Mahajan taking 4/42 for Meghalaya. Sikkim’s total would have been much smaller had it not been for the fantastic unbeaten century of opening batsman Ananya Upendran, who struck 157 not out, which was more than three-quarters of her team’s runs.

Meghalaya’s chase appeared to be going according to plan, with the batsmen keeping pace with the required run rate despite losing a few wickets. Saee Purandare hit 68 at the top of the order, with Debasmita Dutta making 43.

The final over was laden with drama, however. Meghalaya got to 203 with a boundary off the third ball of the 50th over and just required another run to win the match. Unfortunately they could not manage it with L Tamang falling to Upendran and Razia Ahmed then run out by Upendran, which meant that Meghalaya ended their allotted overs on 203/6.

Finally, on the second day of the U-16 Vijay Merchant Trophy pre-quarterfinal, Maharashtra declared their first innings on 623/4, to which Meghalaya had responded with 27/2 at stumps in Kadapa, Andhra Pradesh.

Maharashtra resumed their innings on 324/3 and only declared after KS Tambe reached his triple century.

Meghalaya lost two early wickets in their first innings and tomorrow they will have Josiah Momin (7 not out) and Mrityunjay Bharali (2 not out) at the crease. 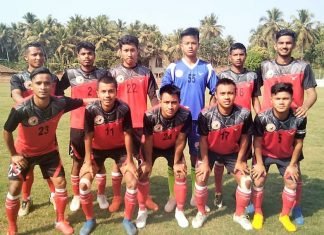 The Sports Room - January 24, 2019
0
Shillong, Jan 24: Shillong Lajong have qualified for the Elite League (formerly U-18 Youth League) final round after topping Group B in the playoffs,... 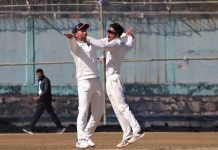 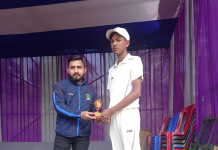 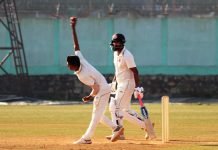 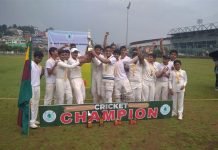