Bhogtoram Mawroh finally got to watch Shillong Lajong in action in the U-18 Shillong Premier League yesterday when they defeated Nangkiew Irat 2-1. He notes the fine performances of players from both sides and feels that Nangkiew have the potential to beat bigger teams but still need to work on converting that potential into reality…

For many years now, the one thing that makes Lajong stand out from the rest of the teams in the SPL is that they always had a well-drilled team. The players are technically proficient as well as tactically adept. For a lot of time in this match, this superiority was again on full display.

Lajong lined up in a 4-3-3 against Nangkiew’s now familiar 4-1-4-1. This was not the 4-3-3 of Rangdajied United, which had Oresterwell Langshiang as the deep lying playmaker. Instead Lajong played with Gladdy Kharbuli and Skillful Tariang as the two holding midfielders and Santi Janai Shianglong as the playmaker in front of them.

Though the two systems were different from one another, the outcome was the same: Nangkiew were outplayed for most of the first half. A lot of this had to do with the fact that in both matches Nangkiew were outnumbered in the middle of the park. Denald C Nongbri and Kitboklang Thangkiew are good players but they need more support. Though the personnel had changed, Damosjune Lawryniang coming in for the presumably injured Sumarbha Bareh and Iainehskhem Kharkrang replacing Mario Shanpru, the system remained the same.

There seems to be a lack of options in the midfield for Nangkiew. Shano Tariang does retreat to the midfield to give support but that takes away from creativity upfront and isolates Albert Nongsiej. Sooner or later Nangkiew will have to find a way to avoid playing on the back foot against stronger teams all the time.

As for Lajong, with the midfield in control and Dajied Wanshong on the left and Glennys Lynrah on the right they moved the ball very smartly and created a plethora of chances in the early part of the first half. Amon Lepcha bullied his way into the box but failed to hit the target. Very soon he got another chance but again missed an open goal. After the two misses one could see a noticeable change in Amon’s body language. He started looking unsure of himself. This lack of confidence was again on display during the second half. Instead of taking a shot when he was inside the box Amon tried to pass the ball to his fellow attacker, which Nangkiew’s defence intercepted. Finally he was replaced. Contrast this with the way Albert played the game.

Albert had a lot of bad touches in the match and he played alone upfront with Henry F Nongneng and Aman Ahlawat keeping a tight leash on him. Even when he got the opportunity to have a free run at the defence his technique let him down. However, Albert never allowed his confidence to waver. He kept his head up and fought for every ball. And eventually he got his goal. In the ill-fated I-League campaign Lajong lacked a number 9 in their ranks. Having sent Shaiborlang Kharpan on loan to Kerala Blasters they had no one who could play in that position. Being in Lajong, Amon will get a lot more opportunities than someone like Albert but if he wants to play at the top (which every professional dreams of) he has to learn from players like Albert. Forget what happened the minute before and focus on the next ball.

As for Albert, he has to improve his first touch, especially under pressure. If he keeps working hard and improving Albert may achieve his dream of becoming a top professional player as well. I wish all the best to both players.

With Dajied leaving Iaineskhem dead on the floor one can say that Dajied won this round. Iaineskhem’s aggressive defending, though, managed to keep Saveme Tariang from advancing too high, something which Kitboklang Khyriem kept doing with consummate ease from the right side.

Very much in the mould of a modern full back, adept at both attacking and defending, Khyriem was a constant menace on the right. Linking up well with Glennys, he played very good crosses into the box. In this age of inverted wide attackers, someone who does what a traditional winger is supposed to do can be very useful. For example, in one of the rare attacks that Nangkiew mounted in the first half, Damosjune had a wonderful chance to play a first time cross. Instead he chose to cut back on his left and the opportunity was lost. Even when he was not running behind the defence, Khyriem played some good passes from his own half as well as showing good game awareness and vision. The one thing that worried me about him was his penchant for getting a red card. Fortunately this time it didn’t happen.

Going forward he has to keep his predecessor Samuel Shadap’s situation in mind. When Samuel Shadap got his opportunity to play in the ISL with Kerala Blasters he was found wanting in pace and strength. This was exposed in the game against Bengaluru FC when Sunil Chhetri tricked him with a stepover and sprinted away. While defending against corner kicks Shadap was bullied by the opposition, who were bigger and stronger. Learning from what his predecessors have gone through will help Khyriem become a better player.

In spite of missing some early chances Lajong were able to score two goals, one from a spot kick and the other from a low shot from Sangti, who during the first half was simply unplayable.

Protecting the ball very well and dancing his way through the players, Sangti looked a very neat player. Lajong’s dominance in the first half, especially in terms of possession, was very much down to his link up play with the midfield and the attack. With Nangkiew looking completely outplayed, as the teams were coming out to the pitch for the second half, one could feel that a rout was on the cards. But credit has to go to Nangkiew, who came out as the more determined team and took the game to Lajong. With Denald stamping his authority in the middle of the pitch, Thangkiew took the game into his own hands.

Showing the control and composure which was missing in the first half Thangkiew combined with the right side attacker who then played a good cross into the box. Albert got in front of the defender and slotted the ball home. Suddenly the whole dynamic of the game changed. Shano, who was left chasing Sangti’s shadow in the first half, started getting into his groove while Honourable also started putting more pressure on Khyriem.

The big difference in the second half was the improvement in the passing from Nangkiew with Thangkiew leading the ball. In fact Thangkiew has been the unsung hero for the last few matches that I have watched Nangkiew play. In this game he showed his worth by almost leading this team to a memorable comeback. Indeed whenever Nangkiew showed composure on the ball, Lajong looked threatened. This makes the wayward passing from Nangkiew during the first half all the more inexplicable.

Granted that Lajong were putting a lot of pressure on Nangkiew’s midfield and defence, but even simple passes missing their mark is not acceptable at this level. Lajong, on the other hand, played the simple pass and played it well. Nangkiew have the potential to play a better, more controlled and dominant game against strong oppositions. But unless they can produce what they are capable of against teams like Lajong or Rangdajied, it will remain just potential.

Though Nangkiew had a better game in the second half, Lajong kept up the attack on the opposition. In fact if it wasn’t for the one player who I believe was the man-of-the-match, they may have won the game as well. Just like it was in the last match, Sukbhalang Kharsyntiew had a very strong game this time as well. The only blemish he had was the yellow card that he took for the team. Apart from that he won all his duels, put in the tackles when required and was in the right position at all times. With B Metoshanki Mawroh complimenting him well, Sukbhalang thwarted all attempts at the goal. As a result, in the second half, except for the wasteful free-kicks, Lajong did not create clear cut chances for themselves.

The good thing is that Sukbhalang seem to thrive under pressure, which shows that he has a very strong mentality, something which is very important for those who want to play at the top. I don’t know who will be Nangkiew’s first choice centre backs in the senior SPL but Sukbhalang will be putting a lot of pressure on them with his performances. This player has a very big future ahead of him. I wish him all the best.

Lajong dominated, as was expected, but Nangkiew came back strongly in the second half. This vindicates the old age adage that nothing is over till the final whistle. It was a pleasure to watch a wonderful match under some beautiful weather. Cheers! 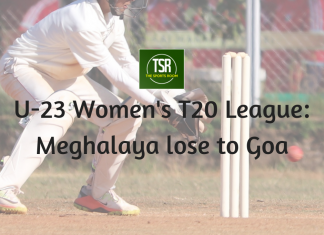 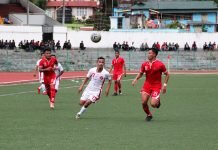 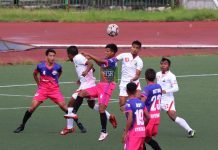 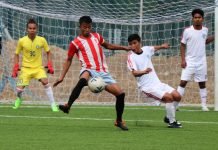 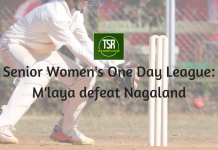