Shillong, Dec 11: The Chief Minister’s Sportspersons of the Month awards were distributed today to one athlete from the Khasi Hills, Jaintia Hills and Garo Hills.

As he had contracted Covid-19, Chief Minister Conrad Sangma couldn’t be present physically to dish out the awards, which took place during an interactive session on the Meghalaya State Youth Policy at the State Convention Centre here.

The awards, which came with a cheque of Rs 1 lakh each, went to Jidalin Tympuin of West Khasi Hills, Batsrang Sangma of West Garo Hills and Sunday Morning Tariang (pictured) of West Jaintia Hills.

Tariang is a veteran sportsperson, having been active in football, badminton and table tennis and has represented Meghalaya as well.

Both Tympuin and Sangma are track athletes who have participated in various state and national events.

Tympuin has represented Meghalaya in the East Zone Junior Athletics Championship in 2015 and North East Games in 2016. She also set a new record in the State-Level Chief Minister’s Inter-School Athletics Meet last year.

Sangma has made a name for himself in long-distance running in a relatively short time, after participating in events such as the Shillong 10K, Mawkyrwat Ultra, Guwahati City Marathon, Kolkata Marathon and Delhi Marathon.

Meanwhile, the Chief Minister stated that the Youth Policy reflects the government’s objectives and the youth’s interest and also incorporates various aspects including sports, education and entrepreneurship among others. He also took the occasion to encourage the youth to give their ideas and suggestions to the government through emails, letters and various other platforms.

Sports & Youth Affairs Commissioner & Secretary, D Vijay Kumar, during his presentation said that Meghalaya is among the top states in the country with a large youth population and with 65% of the population being under 35 years of age, the need for a Youth Policy is eminent. The Sports Room - February 22, 2020
0
Shillong, Feb 22: Meghalaya won their second match of the Women's Senior One-Day Trophy against Sikkim by four wickets and with more than nine overs... 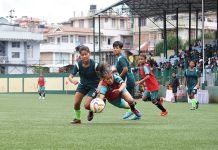