Shillong, Feb 11: Solid defending and some nifty saves from goalkeeper Nidhin Lal ensured that Shillong Lajong FC claimed a point in their final away match of I-League 2017-18 in a 0-0 draw at Chennai City FC today.

Conditions in Coimbatore were tough with the weather hot and the natural grass pitch uneven.

Lajong’s game was largely one of defence as Chennai threw themselves forward but couldn’t find the breakthrough. SLFC weathered the pressure and tried to counter with long balls that almost paid off on a couple of occasions, but they largely abandoned the midfield in the second half in order to defend their goal.

The visitors made several changes to their lineup, bringing in Lal in place of Phurba Tempa Lachenpa. Laurence Doe was swapped for Oh Juho, while Alen Deory got his first start in six matches. Hardycliff Nongbri was also brought back into the starting XI, while Novin Gurung and Lalrohlua were left out.

Deory, however, was pulled in only the 36th minute with Kynsailang Khongsit inserted to shore up the defence with Chennai’s Michael Soosairaj posing a danger on the flanks.

Lajong had a couple of look-ins in the first half, the best of which came about through Samuel Lalmuanpuia’s 19th minute free-kick, which was headed by Aiban Dohling towards goal, but put out by the quick reactions of CCFC goalie Kabir.

On the edge of half time Lal pulled off a diving save low to his right to deny Aleksander Rakic and the two teams headed into the break goalless.

Chennai kept up the attacking play in the second half looking for goals and their first win at home this season, but Lajong continued to defend well.

In the 62nd minute Shaiborlang Kharpan was brought on for his first appearance in 11 games, replacing Abdoulaye Koffi, who made a less than impressive performance. Kharpan, however, didn’t last the match, being switched for Lalrohlua later on.

Both sides came close to scoring within the space of seven minutes but were denied in similar circumstances.

First a long ball for Saihou Jagne saw him beat Kabir, but his header towards goal wasn’t strong enough, which allowed Dharmaraj Ravanan to clear the ball well before it got near the goal in the 67th minute. Jagne appeared to have received a bloodied lip from the attempt after clashing with man-of-the-match Venyamin Schumeiko for the ball.

Then, in the 74th minute a chip by Kim Dong-Hyeon from inside the box almost found its way into the goal, but Rakesh Pradhan made a fantastic clearance off the line.

Lajong held off further attacks by the hosts and claimed a valuable point after three consecutive defeats. This was also their 50th clean sheet in the I-League and they stay in fifth place with 18 points with two home matches to go. They now have more than a week’s rest before taking on defending champions and sixth-placed side Aizawl FC on 19th February.

Chennai remain in ninth on 13 points and must be terribly disappointed after wasting so many opportunities. They stay at home to face Churchill Brothers on 17th February. 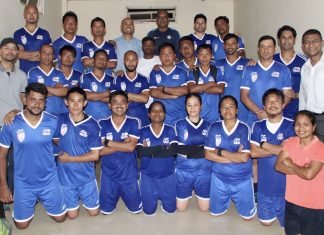 The Sports Room - June 18, 2019
0
Shillong, Jun 18: The All India Football Federation in collaboration with the Meghalaya Football Association conducted an AFC B Licence (Module 1) course in Shillong... 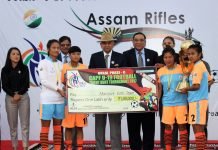 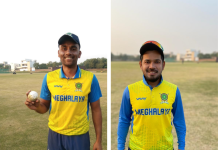 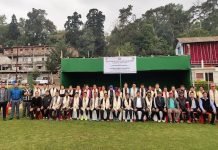