Shillong, Mar 6: The fourth edition of the much-anticipated Assam Rifles Invitational Football Tournament began at the JN Stadium here today with the opening game between Lawmali SC of Shillong and first-time participants Narwan SC of East Jaintia Hills proving to be just the start that the tournament deserved.

Lawmali came through the contest as 3-1 victors to move into the next round.

The 16-team competition, which will run until March 16, has become a regular feature of the local football scene and the winners’ trophy a high-coveted one. The tournament is also being held as part of Assam Rifles’ 184th Raising Day celebrations.

At the opening ceremony the chief guest and patron of the tournament, Director General of Assam Rifles Lt Gen Sukhdeep Sangwan, welcomed all the participating teams and players to the “exciting event and enriching competition.”

“For me it is a challenging task to talk about football in a place whose identity is football and whose people dream of football and for whom football is a way of life,” Lt Gen Sangwan said. “I say this with total conviction and backed up by the fact that Meghalaya were the first to recently launch the Meghalaya Baby League, which goes by the famous dictum of ‘catch them young’. It’s fantastic to see the tiny tots full of josh as if the globe is there in their pocket.”

The DG also explained the reasoning behind Assam Rifles’ continued support for the tournament.

“We are the oldest paramilitary force and we are the first responders and friends of the North East. With our headquarters in Shillong we decided to host this tournament here. We will be with you in promoting sports and we will be part and parcel with you. We offer you our facilities in Laitkor for the Baby League and other tournaments to make Meghalaya football grow,” Lt Gen Sangwan said.

The match which followed was a close one, with end-to-end action. If only Narwan had been able to keep more of their shots on target perhaps they would have ran Lawmali closer.

As it was Shanbor Jyrwa scored in only the 11th minute with a long-range shot and that was it in terms of goals in the first half as Narwan’s goalkeeper Sivel Rymbai kept Lawmali from picking up more goals.

A defensive lapse in the 61st minute allowed Jyrwa to score again and when team mate Damehun Syih was fouled in the box Jyrwa converted the resulting penalty.

Narwan never gave up the fight, however, and pulled a goal back late in the game when Diborlang Lamin headed in a cross in the 90th minute.

Tomorrow Lawsohtun will take on Eastern Pirates at 10:30AM, followed by Seven Brothers versus Sawmer at 1:30PM. Both matches will take place at the Assam Rifles astroturf ground in Laitkor. 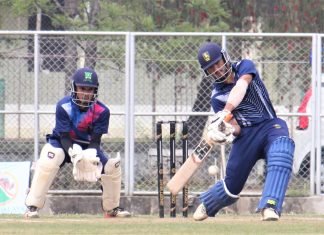 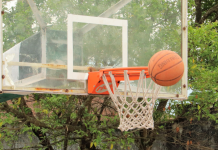 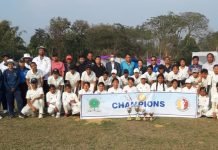 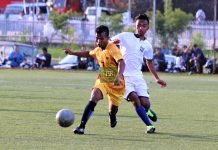 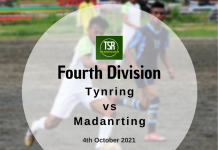