This was the most one-sided result in the final round so far this year.

Meghalaya had a few days rest since defeating Kerala 4-2 in their Group A opener and kept the Goan defence and goalkeeper busy right from the beginning of the contest.

A good diagonal ball from Rympei into the Goan box saw Wahlang steam past the defence to smash the ball in for the opening goal and Meghalaya soon had a chance five minutes later when Lyngdoh was brought down in the box. However, Samchaphrang Lato’s stinging penalty kick hit the upright and stayed in play.

Lyngdoh was in the thick of the action soon after, dribbling the ball into the box, but seemed to lose it and a Goan defender looked to shepherd the ball out for a goal kick. However, Lyngdoh did not give up and managed to toe the ball towards Wahlang, who spun around and fired in the ball to put Meghalaya 2-0 up.

In the 43rd minute Mawkhiew might have thought of going for goal himself, but unselfishly left the ball for Lyngdoh to pump in the third goal and Meghalaya went into the break leading 3-0.

Plenty more goals followed in the second half, with Mawkhiew providing a second assist for an unmarked Lyngdoh in the 49th minute and it looked like Meghalaya would run away with the match as Goa had no answers.

Mawkhiew and Lyngdoh then switched roles for the fifth goal, with Lyngdoh running deep up the left and cutting the ball back towards Mawkhiew. The No. 15 then trapped the ball with his left boot before scoring with his right.

A through ball three minutes later from Wanboklang Wahlang presented Rympei with a chance to score. His first attempt was blocked by the Goan goalie but the ball popped up and Rympei headed it over the line.

As impressive as they were in front, the Meghalaya boys were also excellent in defence, mopping up any balls in their own half and generally keeping the Goans well away. However, Meghalaya couldn’t keep a clean sheet, with a Goan free-kick squeaking through in the 68th minute.

Conceding did not take the edge off Meghalaya’s performance, though, with Wanboklang Wahlang feeding another ball to Lyngdoh, who ran rings past the Goan defence to feed it to Lytan, who simply had to tap the ball into the net to make it 7-1. Rympei bagged the last goal of an incredible performance after a free-kick caught Goa napping a little bit.

With two wins in two games Meghalaya are at the top of Group A with six points. Kerala, who bounced back after losing to Meghalaya with two victories, also have six points, but are behind on head-to-head as well as goal difference.

Meghalaya will next take on Punjab on Tuesday. Punjab have drawn one and lost one match so far. 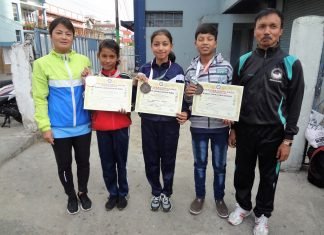 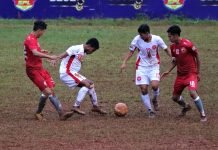 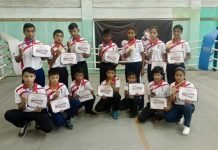 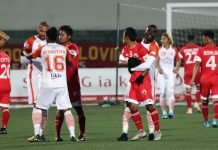 NEROCA look to extend unbeaten streak against bottom side Lajong on... 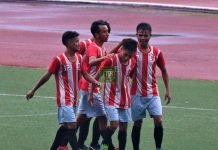