This is the first time this season that a team has come from behind to win. 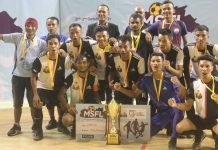