Shillong, Aug 29: Shillong Lajong just about scraped through with three points against Nangkiew Irat in the Shillong Premier League at the JN Stadium today after captain Samuel Lalmuanpuia converted a last gasp penalty.

The 1-0 win takes Lajong back to third place with nine points from five games but it was a far from convincing performance by the three-time champions.

The penalty in question came about after a handball in the box by Khangmiki Pale when Lalmuanpuia attempted a cross.

The assistant referee quickly signalled a foul but this was vociferously protested to by the Nangkiew players but it did look that Pale’s hands went up in self-preservation.

Lajong were certainly lucky to come away with three points as they weren’t up to the mark today. They made 20 attempts on goal but only six of these were on target.

Nangkiew, meanwhile, allowed SLFC to take control of the midfield in the first half, seemingly happy to sit back and wait for Lajong to come forward.

Still, that didn’t mean that Lajong could capitalise on being given so much of the ball.

They made five attempts on goal that were wide of the mark before Phrangki Buam finally forced Kharumnuid to make a good block in the 27th minute.

Nangkiew got rid of their timid defensive play in the second half and that’s when things started to get a little interesting.

In the 50th minute it looked like Sheen Sohktung would score on the break when he went one-on-one with Kharumnuid, but the No. 23’s tap hit the upright and the keeper snapped up the rebound.

Twelve minutes later Buam was fed a through ball but Kharumnuid denied Lajong once again.

Towards the end of the game Nangkiew looked like they would’ve settled for a draw and a point against their more fancied opponents, but that hope all unravelled in stoppage time.

Mahesh Naorem was first denied by Kharumnuid, with the ball the looping up and into the path of Lalmuanpuia and the rest is history.

Nangkiew stay stuck in fifth position with four points and will be bitterly unhappy at conceding in the dying few seconds to Lajong. No team, in fact, has scored a winning goal this late in the game so far this season. 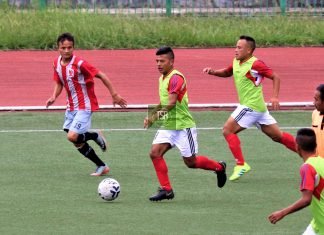 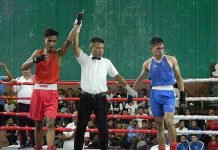 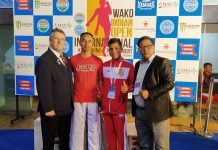 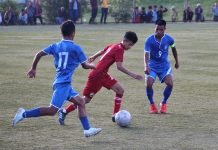