Shillong, Sep 1: Sawmer registered their second point of the Shillong Premier League with a 2-2 draw against Malki at the JN Stadium here today.

A horrible mistake by Malki goalkeeper Sbing Chyrmang in the 23rd minute saw Sawmer go ahead, only for Malki to fight back in the second half and take a 2-1 lead thanks to goals from Lakhon Surong (47′) and Primrose Lawat (70′).

However, Sawmer weren’t done yet and substitute Gamelial Kharlyngdoh put the match back on level terms in the 73rd minute.

This match, between the two lowest-ranked teams, had plenty of action right from the start, like the Malki corner that Primrose Lawat headed towards goal, but which was scooped up by Sawmer goalie Sunshine Kharmuti in the second minute.

The mercurial young talent Rheadolf Nongneng Daloi had plenty of shots on target today, but couldn’t convert any of these for Sawmer. He missed a sitter in the third minute but then was largely on target from then on.

Then came the own goal conceded by Chyrmang, who let a back pass from Ouseynnou Kamara past him. It was a bad bounce, to be sure, but still, the keeper should’ve done better and that mistake characterised a first half in which Malki looked very low on confidence, unsurprising given their run of three consecutive losses.

Malki had a new yet old face in their ranks today – Marlangki Suting – who produced a good shot in first half stoppage time that was blocked by Kharmuti.

Whatever coach L Darlong seemed to tell his troops during the break appeared to have done the trick for Malki in the second half as they looked a very different side.

The equaliser was bagged in the 47th minute when Alem Khongwir chased down a through ball that at first got past him, crossed it and Surong scored from close range.

Sawmer didn’t let that equaliser get them down and created a couple of good opportunities for themselves after, but Malki then seized the lead in the 70th minute.

It was Khongwir again on the right flank. This time he chipped it left and Lawat headed it home.

That lead lasted just three minutes, however, as Janbor Marbaniang put in a ball for substitute Gamelial Kharlyngdoh, who swung his boot through the ball and past a diving Chyrmang.

Marbaniang was himself denied by the upright in the 81st minute and five minutes later a Ronnie Nongbri strike went into the back of the net, but it was overruled for offside. Jebedaia Darlong was in the offside position and the ball came straight to him. Though he didn’t go for the ball, instead leaping over it, he was blocking the view of Kharmuti and that must have been his offence.

Sawmer continue to occupy the bottom of the table with two points, while Malki move to fifth with four points. Nangkiew Irat also have four, but Malki are ahead on head-to-head after beating Nangkiew 3-1 on 6th August.

On Monday Shillong Lajong will take on Rangdajied United at 3:45PM.

(Photo contributed by Malki SC. Malki are in blue, Sawmer in red) 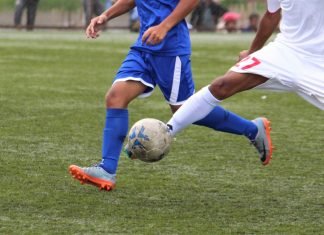 The Sports Room - January 10, 2020
0
Shillong, Jan 10: Hosts Meghalaya have been clubbed with Haryana, Odisha and the Sports Authority of India in Group C of the Junior National... 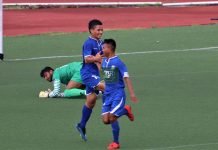 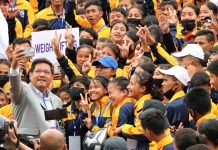 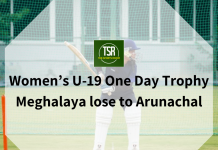